The Oregon Country Fair has thousands of volunteers that work behind the scenes to make the fair the terrific festival it’s become after 46 years in existence. As sign painting volunteers, we’ve teamed up with friends that work security, have booths, or participate in other ways which gives them passes to camp on the fair property a few days before and during the fair. Some people camp behind their booths in the main fair area while others camp in the trees around the sign barn, or in other designated areas which have evolved and developed through the years. We camp in what’s known as Miss Piggy’s Lot which is a recently mowed giant hay field. We were fortunate to be invited to join an established camp a few years ago and the field is sectioned off into camp spots with fire roads, and access to water and “blue box” porta-pots in each area. This year we had 14 people in our “compound” – 3 vehicles, 8 tents, a kitchen area and living room. In Miss Piggy’s alone there are probably another 100 “compounds” similar to ours. When we set up camp, we pound in metal stakes around our perimeter, then hang clothesline and tapestries along those lines with bamboo and reed fencing along the front, including a nice entrance hallway. It truly does feel like home once it’s finished.

Below shows some of what the field looks like as it’s beginning to fill up, with some neighboring campers. 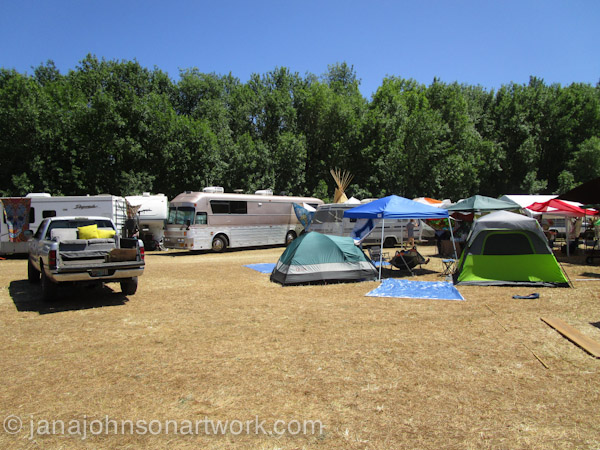 This next photo shows the front of our “compound” and the water truck filling our fresh water containers. The striped blue awning just inside the compound is our kitchen area.

Here you can see a lot of our camp compound with tents circling the outside edges, the kitchen on the far side with a large awning over the living room, and tarps extended out from it to shade some tents. It’s also a sweet moment with my youngest daughter!

Here the photographer is standing in the living room, looking back towards the corner the previous photo was taken showing our truck “bedroom” and the awning we put up in the back corner which was a great dressing room for our camp tribe. The tarps and rugs helped keep some of the dust down, but it’s been such a dry summer everything was covered in dust from any traffic that trundled past the front door – of which there was plenty! 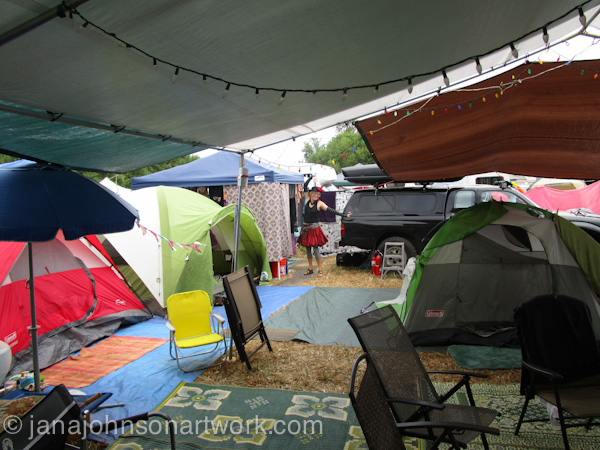 Leaving camp, we entered the new area where my banners were hung in the Stewardship booth, and around the corner from there was where Brad’s two signs were hung – Info and White Bird.

Brad and his cousin Mike pointing out his sign contributions.

Last, but not least, a little story about using the power of thought to make a wish come true. We’d finished at the sign barn late afternoon the Thursday before fair started that Friday, tired and thirsty. Brad was wishing he’d brought a bike to ride back to camp as I stopped down the hill from the sign barn to fill my water bottle. When I turned back to continue walking “home” a bike and trailer appeared with a single passenger. Nick the bike owner encouraged us to hop aboard with our paint gear and heavy bags, so we did! He dropped off his other passenger, then rode us the whole way back to our camp front door, only asking for calories in payment. Truly a magical fair-y moment, one of many we experienced this year at the Oregon Country Fair.

View all posts by janajohnsonartwork

Thank you for respecting and not copying my photos, artwork and words on this blog. Please contact me if you would like permission to use them. Thank you!

You can purchase my paintings with my Singulart Gallery Link

More of my artwork